If you think you couldn't possibly have parasites, think again. Most people believe that parasites are rare in America and are only found in third world countries. Or that you can only 'catch them' while travelling. But that is simply not true!

Consider what Dr Frank Nova, Chief of the Laboratory of Parasitic Disease of the National Institute of Health had to say: 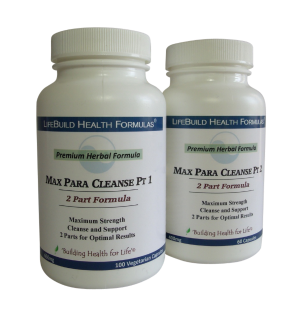 "In terms of numbers, there are
more parasitic infections in this country than in Africa."

He's not alone in his assessment. Other experts put the number of Americans infected with some kind of parasite at between 50% and 90%.  Even our own CDC(Center for Disease Control) is admitting parasites are an emerging problem.

We take for granted the need to regularly 'de-worm' our pets and agricultural animals(or try to), but fail to recognize the need to de-worm ourselves! Parasites are just as likely to turn up in us as in our pets or livestock.

Max ParaCleanse
is a comprehensive two part parasite cleanse designed for optimal effectiveness in helping  rid the body of unwanted guests of all kinds. It is a blend of 13 of the world's finest herbs used for hundreds of years to help eliminate parasites.

But once we have contracted a parasitic infection, it can create a nightmare for the body. Your health would be just 'not right.' Or worse. And you wouldn't even know the cause.

To make matters worse, parasites often migrate out of the digestive system to other tissue and organs, creating a systemic infection.

They also can lay tens of thousands of eggs every day! So they can become a big problem pretty quickly.

They take the nutrients from the foods we eat and eliminate their waste creating a toxic and stressed condition as the body attempts to detoxify and neutralize the effects. You don't need a weakened immune system to contract parasites.

Parasites can be the underlying cause of many unexplained illnesses, but go undiagnosed because the medical community doesn't really understand that parasites could be the problem. Unreliable testing methods also hinder diagnoses.

If you have any of the following you could have a parasitic infection that is at the root of the problem.

Often,there are no clear symptoms at all except a vague sense that your health is somehow off. Unexplained tiredness, allergies and the like. They are very stealthy and can go completely undetected for years.

We can get parasites from the soil, our pets, the foods we eat, drinking water, and even other people who are harboring a parasite.

Parasites are extremely tough to diagnose. Normal stool analysis often turns up nothing even when you could have a severe parasitic infection.

That is why it is suggested everyone do an herbal parasite cleanse at least twice a year for a minimum of 45 days each to eliminate all life stages of the parasite.

Pharmaceutical de-worming medicines are becoming much less effective all the time due to the build-up of resistance by parasites as a result of the routine overuse of parasite medication in agriculture and elsewhere.

There are several effective anti-parasite herbs that nature has provided us that have been used for centuries to help eliminate parasitic infections. Unfortunately, many products just aren't strong enough or effective enough. That's why I developed the Max ParaCleanse. 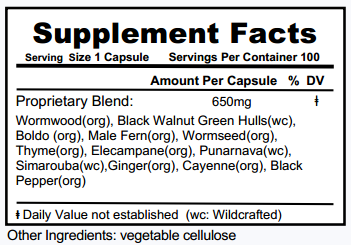 Cloves themselves do not directly kill parasites. But they are an important  part of a parasite cleanse which we strongly suggest using. Why?

Cloves dissolve the hard casing around parasite eggs. This in turn allows the parasite killers in Max ParaCleanse Pt 1 to do their job. You can kill parasites without the cloves, but it will take longer because you won't get the eggs. As the eggs hatch, you will have a new round of parasites to contend with. So definitely suggested.

Our cloves are the best organic cloves available. VERY strong and potent. You can find them elsewhere, but not stronger, and probably not cheaper. We kept the price down because we really want you to use them as part of the cleanse.

Why not just add the cloves to Max ParaCleanse Pt1?

Cloves are a natural solvent. In fact, they will even break down the cellulose of the vegetarian capsules in Max ParaCleanse Pt1, leaving the capsules brittle and broken. I found that out the hard way...

Even more important, I also believe that the same solvent properties in cloves was somehow affecting the other herbs and possibly breaking down or inactivating some of their more fragile chemical components. The result seemed to be a less effective product. Didn't want that! So separate it was.

You also need more cloves to effectively 'melt' the parasite egg casing. So it was determined a separate bottle was needed. While I prefer using vegetarian capsules, I had to use regular gelatin capsules for the cloves, else you would have a lot of brittle and broken capsules!

Suggested Usage: As a dietary supplement, take 2-3 capsules Max ParaCleanse Pt1 with 1 capsule Max Para Cleanse Pt 2 prior to meals up to three times per day. Use for a minimum of 45 days. Do not exceed dosages without consulting your doctor.

Out of Stock! Sorry for the inconvience.

*These statements have not been evaluated by the Food and Drug Administration. This product is not intended to diagnose, treat, cure or prevent any disease.